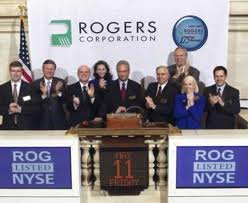 A reconciliation of the GAAP to non-GAAP operating results discussed in the preceding paragraph for the first quarter of 2012 and 2011, respectively, are included at the end of this release.

Sales of Printed Circuit Materials (PCM) totaled $39.4 million for the first quarter of 2012, a decrease of 8.2% from the $42.9 million reported in the first quarter of 2011. Sales into the wireless infrastructure market were weaker in the first quarter of 2012 compared to the year ago quarter, consistent with the general softness in this market that was widely reported during the quarter. Demand was also soft into high reliability applications due primarily to customer inventory levels being closely managed during the quarter. However, sales increased significantly into automotive radar safety sensors and wireless infrastructure 4G smart antenna applications, where the Company's line of newly introduced printed circuit materials have been gaining traction in the market.

Curamik Electronics Solutions reported sales of $24.3 million for the first quarter of 2012 compared to first quarter 2011 sales of $32.9 million. Lower revenues at Curamik in the first quarter of 2012 are primarily related to significantly lower demand in wind energy and industrial motor drive applications, combined with major inventory corrections in the supply chain. The Company believes that some of this downturn in demand is temporary and the long term outlook for energy efficient motor drives remains strong. However, the outlook for the wind energy market continues to be weak. Offsetting this softness was demand for Curamik's direct bonded copper materials in x-by-wire technology for the automotive industry, which has been increasing significantly. This technology replaces traditional mechanical systems with electrical systems in automobiles to help improve overall performance and fuel efficiency.

Power Distribution Systems (PDS) first quarter of 2012 sales were $10.5 million compared to $12.4 million in the first quarter of 2011. The PDS business experienced weaker demand for its products in the first quarter of 2012 due largely to the slowdown in high speed train investments in China. The Ministry of Railways in China has now reported it will continue its 2012 railway investment plans at a slightly slower pace than their original plans and they have begun to release orders. PDS has been experiencing greater demand for its products in freight locomotives, particularly in China.

Rogers' 50% owned High Performance Foams joint ventures had sales totaling $12.8 million this quarter compared to the $18.0 million sold in the first quarter of 2011. Joint venture sales this quarter were significantly lower due to the continued weakness in the Japanese domestic and export markets, particularly LCD TV's, domestic mobile phones and general industrial applications.

During the quarter, the Company took action on its restructuring and streamlining activities. These improvements included efficiencies in supply chain and manufacturing operations, cost reduction activities, headcount reductions through a voluntary retirement program and the consolidation of some positions. In addition, the Company liquidated its auction rate securities portfolio. Total charges, net of tax, recognized in the first quarter of 2012 resulting from these initiatives were $6.1 million.

Rogers' balance sheet ended the first quarter of 2012 with cash and short-term investments of $93.5 million. Capital expenditures were approximately $4.2 million for the first quarter of 2012 and are expected to total approximately $35 million for the year. As mentioned, during the quarter the Company liquidated its remaining portfolio of auction rate securities for net proceeds of $25.4 million. In 2008, when the auction rate markets initially became illiquid, Rogers held $54.4 million of auction rate securities at par. Over the course of the past few years, $24.9 million of these securities were redeemed, mostly at par. During the quarter, the Company utilized $10 million of the proceeds to fund its defined benefit pension plan, which is expected to result in an annual savings of approximately $1.2 million.

Bruce D. Hoechner, Rogers' President and CEO commented: "I am pleased with the transformation and streamlining efforts that were initiated in the first quarter. Our efforts to drive efficiency and focus across the enterprise are beginning to pay off with an expected second quarter savings of $1.5 million increasing to a quarterly rate of $3.3 million by the fourth quarter of 2012. As expected, the first quarter was challenging but performance was in line with our expectations and guidance. While we achieved record first quarter sales in our High Performance Foams business and market share gains in several emerging segments, we continued to experience overall weakness in demand in our Curamik, PDS and PCM business units. We continue to believe the lower demand is directly related to the business uncertainty caused by the economic conditions in Europe as well as constrained growth and spending in China, all of which are negatively impacting spending on capital and infrastructure projects. Overall, we remain confident in the mid and long term strength of our core markets. We are beginning to see initial signs of market improvement and we believe business conditions should improve in the second half of 2012. The business climate uncertainty in the near term, however, is tempering second quarter 2012 guidance. Therefore, we estimate second quarter 2012 sales to be in the range of $125 to $132 million and earnings per diluted share in the range of $0.37 to $0.47."

Statements in this news release, including but not limited to the projected future impact of cost reduction initiatives and other projections of financial results and planned operational enhancements that are not strictly historical may be deemed to be "forward looking" statements within the meaning of the Private Securities Litigation Reform Act of 1995. These forward looking statements are based on management's current expectations and are subject to uncertainties and risks. These uncertainties and risks include, but are not limited to, our achieving less than the anticipated benefits and/or incurring greater than anticipated costs relating to cost reduction initiatives or that such initiatives may be delayed or not fully implemented due to unanticipated or greater than anticipated operational, legal or other challenges, changing business, economic, and political conditions both in the United States and in other countries, particularly in light of the sovereign debt issues globally, market demand and pricing, the possibility that anticipated benefits of acquisitions may not materialize as expected, competitive and cost factors, unanticipated delays or problems in completing our planned operational enhancements to various facilities, rapid technological change, new product introductions, legal proceedings, and the like. Forward looking statements in this press release should be evaluated together with these as well as the other uncertainties and risks that affect Rogers Corporation's business, particularly those discussed in its most recent Form 10-K filed with the Securities and Exchange Commission. Such factors could cause actual results to differ materially from those in the forward looking statements. All information in this press release is as of May 1, 2012 and Rogers undertakes no duty to update this information unless required by law.Additional Information and May 2, 2012 Conference Call
For more information, please contact the Company directly, visit Rogers' website on the Internet, or send a message by email.Website Address:  http://best-mobile-operator-review.blogspot.in/ A conference call to discuss fourth quarter and year-end results will be held on Wednesday, May 2, 2012 at 9:00AM (Eastern Time).